Pluto swoops into the solar system at a 17° angle to the other planets' orbital plane. This small but meaningful angle, 5% of a circle, equals the degree of separation from Sun that any planet needs to become visible from out of the solar glare. It measures the amount of space distinguishing a psychological function from the central personal purpose. Pluto does something similar at the other end of the spectrum. It introduces interstellar forces from deep space into our system from a slightly different perspective than that of the other planets' shared orbital level. It orients our solar system to its galactic matrix. 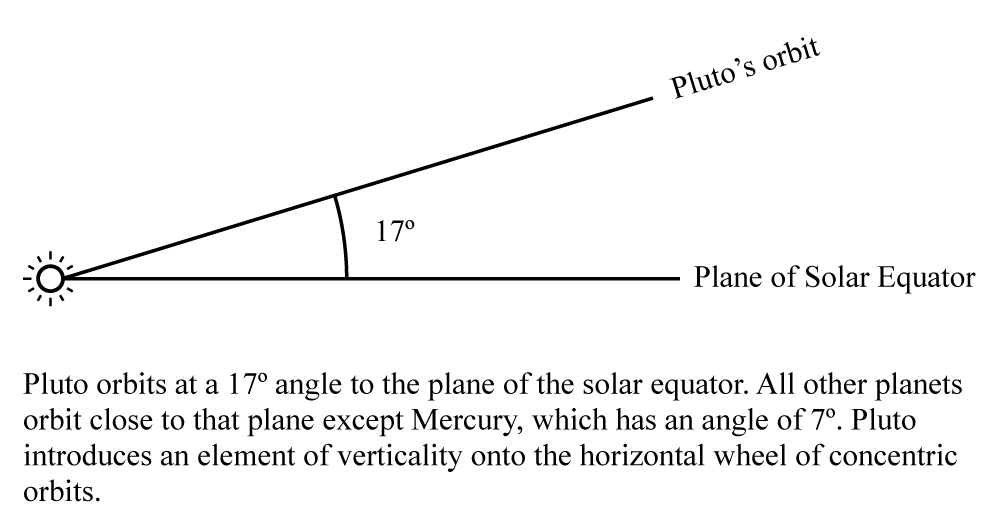 Pluto is also the only planet that intersects another planetary orbit. It actually crosses Neptune's path and spends 20 years closer to Sun. It then moves out again for a long ride (228 years) at the outer fringes of the system.

Thus Pluto orbits Neptune. They are planet and moon, as well as two distinct planetary forces. Yet Pluto almost always intersects Neptune's orbit far away from Neptune itself, perhaps even in zodiacal opposition to it. Pluto does not circle Neptune's physical globe so much as its energy level in space. It interweaves Neptune's trajectory with a visitation from a far domain. Penetrates Neptune's perimeter of motion with the periodic intrusion of a world from beyond our system of worlds. This implies a subtle relationship between Neptunian dream and Plutonic passion, redemption and resurrection, at the far edge of psyche.

Neptune's orbit marks the shoreline of human consciousness. Our solid reality fades out into a foggy Ocean of dreams, demonic and divine. Here one's known identity, centered on a star, experienced on Earth, dissolves into dim mists where all desire dies.

Our planetary system ends at Neptune. Beyond it a cloud of tiny planetoids tumble through the dark. It forms a sphere of icy fragments: not organized on a coherent plane, but scattered across the sky; not moving in circular patterns, but careening on wildly elliptical paths in all directions; not consolidated into one body, but splintered into countless shards. This is the Oort Cloud/Kuiper Belt, a shatter zone of ice and rock, leftover debris from the solar system's formation.

The Oort Cloud embodies a spherical asteroid zone surrounding our solar system, enclosing it within a cosmic placenta. This bubble mediates between our star and its galactic environment. Some of the Cloud's material spirals inwards as a flattened disc: the Kuiper Belt. That acts as an umbilical cord transmitting interstellar vibrations to the planetary domain. Pluto, at the Kuiper Belt's near edge, focuses those signals into psychic wavelengths.

This jumbled astronomical layer resembles the quantum chaos underlying physical phenomena. Yet it gave rise to the solar system's structured cosmic atom. Pluto connects these two planes of being. The subatomic energy field fundamentally differs from, yet creates, material reality. Similarly, Pluto converts a general life force into instinctual urges. It channels elemental sensations into the primordial images that then generate consciousness.

Pluto does not describe a state of being like the other planets, but rather an irresistible force. It enters and disrupts a stately minuet of circling worlds. This intruder explodes out of the nowhere beyond Neptune's nirvana. It relays a generation long broadcast from the stars, then flings itself back out at them, to metamorphose and return centuries later. Pluto symbolizes a periodic shock wave that reverberates through the solar system then vibrates back out into the galactic void.

Pluto does not symbolize an autonomous psychological function (such as Venus = love, Mars = personal will, etc.). Rather it invokes a new commandment. This acts as an overwhelming compulsion, an obsessive drive. As such it is partial, fixated on one thing to the exclusion of all others. It includes a readiness to destroy the whole identity in order to promote one overriding Priority.

Pluto's impact disintegrates an old Neptunian myth, releasing its vitality into a fresh spiritual impulse. It obliterates its previous qualities and concentrates their energy into a singular surge. This arises as a simple imperative that redefines a worldview.