Uranus twinkles at the very edge of visual perception. Despite millennia of stargazing this faint, slow moving speck was not even recognized as a planet until observed telescopically in 1781. Uranus also spins at a right angle to all other planets. This remote ice giant's astronomical properties hint at its psychological and spiritual symbolism. 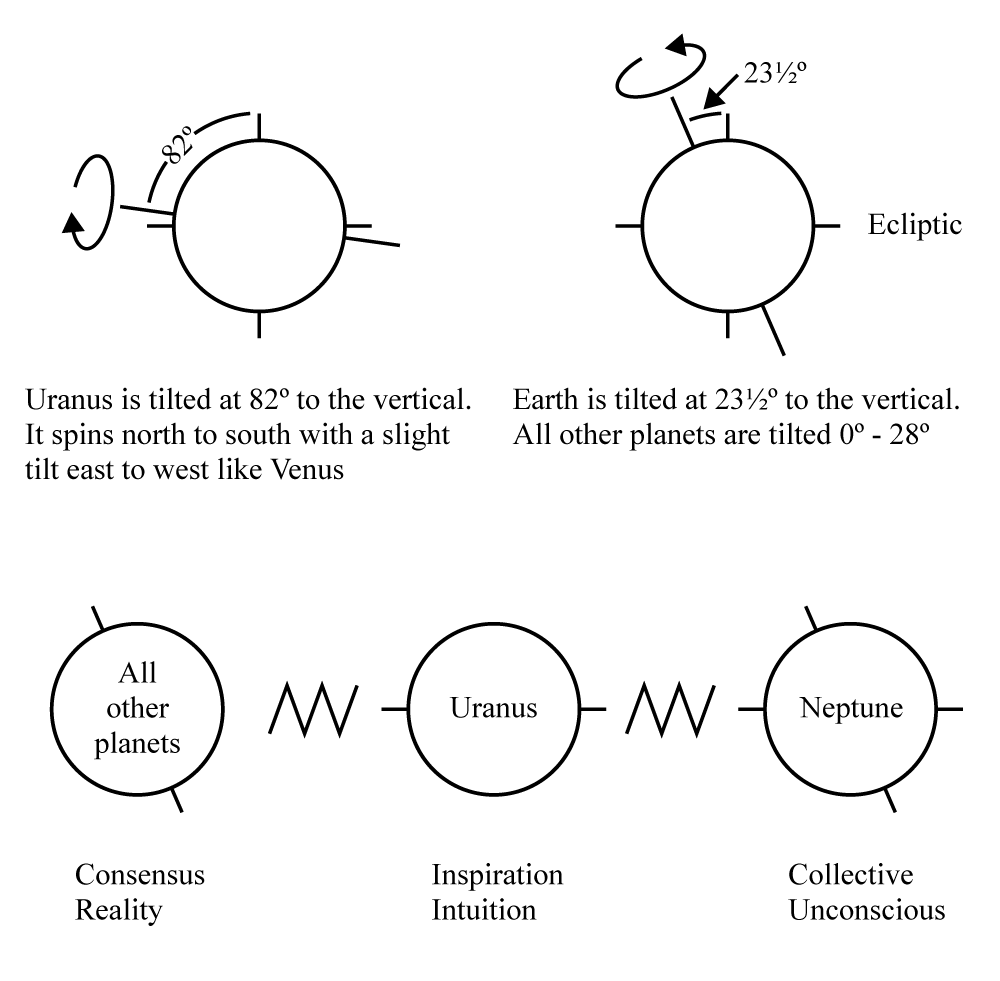 Uranus orbits just past unaided discernment of its nature, like an implied truth one can't quite grasp. It hints at a separate reality outside the reach of our physical senses and mental categories.

Uranus' perpendicular orientation to the visible inner planets of personal consciousness provides the channel transmitting power from an invisible source (Neptune) to our phenomenal world. It links perceptible dimensions of time, space and causality with a formless Beyond. That cannot be defined in any way, yet it is the origin and end of all existence. Uranus grounds its potential into our palpable experience of matter, life and mind. Uranus connects finite entities with infinite energies; conscious character with its unconscious wellsprings.

Material reality emanates out of an intangible energy template. That such an unseen force field guides and molds the physical world is clearly understood by science. The modern creation story describes a universe exploding out of the void. Astronomers speak of an imperceptible 'dark matter' shaping the galaxies and an even more mysterious 'dark energy' accelerating cosmic expansion. (Indeed, 'normal' physical matter seems to account for only about 5% of the heavens' known mass.) At the other end of the scale, physicists describe a subatomic quantum realm where dense substance condenses out of and evaporates back into flashing background radiance. All of this is consistent with the traditional wisdom of most cultures, which portrays the manifest world as precipitating from and sublimating towards a spiritual dimension beyond the confines of thought.

Saturn embodies the Cross of Matter on which spirit takes form in our four dimensional universe. Uranus points to a more subtle cross uniting both matter and spirit in transcendent states of consciousness: encounters with intuition, inspiration and revelation.

Uranus' orbit defines an interface joining visible phenomena with their causal purposes. It portrays an etheric body animating physical form with incorporeal vitality. An electric aura galvanizing objects into action and subjects into awareness. Uranus' actual position along this path pinpoints where one encounters this spiritual surge into manifestation. Why one tunes into a Mind that jump-starts all smaller minds. And how one's ego identity responds to its stimulation.

Uranus symbolizes the abstract principles that coalesce into Saturn's laws of existence and stages of conscious development. It registers the invisible currents driving events, the subtle rationale behind specific facts. Here one peeks into the intangible force field within which materiality is embedded: an ideal order shaping sensible substance and motivating psychological process. Uranus describes the inspiration for Saturn's concrete framework of circumscribed circumstance. It embodies an evolving paradigm, an archetypal image, elaborating over time into an existential identity.

Uranus shows where and how one comes to terms with that which is larger than what one knows or can know. Whether this proves to be stimulating or destructive depends on one's attitude to the unknown. Openness and curiosity can assimilate its novel insights into a more inclusive worldview. A closed or defensive mind feels threatened by them.