Astrology is the symbolic technique relating subjective experience (consciousness) with heavenly phenomena. It is based on the principle that the Universe is indeed a unity, hierarchically organized, with various levels similar in nature, differing only in magnitude. These are focused like concentric spheres around a common spiritual source, with 'its center everywhere, its circumference nowhere.' The solar system is one such sphere, centered on Sun. A human is another, smaller but similar, centered on the heart. Each grounds intangible identity into actual expression.

Astrology's fundamental axiom is 'As above, so below.' This can be applied literally to heaven and earth, planets and people. Or, more philosophically, to the proposition that a higher dimension of consciousness pervades all phenomena.

Does the material world reflect a prior spiritual reality? Astronomers describe a cosmos exploding out of another dimension in the Big Bang. Physicists describe spontaneous quantum flashes self-organizing into regular laws of nature. At its origins and in its most primal state matter emanates out of implicit potential into explicit fact.

On a parallel psychological plane, does a larger meaning inform our consciousness? Awareness evolves through a series of gradations from physical sensation to emotional feeling to mental thought to intuitive insight. It polarizes as a force field of concrete perceptions on one plane synthesizing into a more refined and inclusive sense of meaning on the next. Thus measurable nerve impulses and brain waves are associated with immaterial thoughts. Thoughts also have an interior subjective dimension. That direct experience is more real than just its physical substrate because it encompasses both the physiological stimuli and its psychological significance.

Consciousness participates in but also exceeds its neurological foundation. A greater comprehension distills events into emotions, information into intelligence. It illuminates the elements of reality with an emerging appreciation of their subtle harmonies. This pattern recognition ability transcends its data processing base. And resonates with the cosmic pattern in which it is embedded.

Consciousness reveals itself on every level, from the chemical affinities of an atom to the organizing principles of the cosmos. It does not involve determinism. How can the essential nature of the universe be subject to its cause and effect operational logic? Consciousness means a range of possibility appropriate to each level, oriented towards its eventual transcendence.

Every such level incorporates and goes beyond its predecessors. An atom reflects the same reality as a human. The several classes of atoms parallel the several general temperaments of man. But an atom embodies a smaller and earlier plane of that reality. It cannot encompass emergent properties that blossom at the human level. In order to contemplate a level of existence that does justice to the sophistication of human evolutionary achievement one must look up. To the solar system.

A physical atom, a biological cell, a self-conscious human all ground a spiritual potential seeking release in matter, life, mind. Seen close up any of these levels can bewilder with detail and complexity. The next level, the solar system, is objectively observable at a distance. It functions on a different scale, but reflects the same reality.

Both the solar system and a person are fractals, miniature versions of the universe. Each of these levels contains all of its features, though emphasizing some according to its nature. One such plane of being is the human, made in the image of God. Another is the solar system, with the same essential energy centers, displayed in a different physical form.

Both the solar system and a human being are manifestations of a deeper underlying spiritual reality. The planets of the solar system do not cause human attributes. They resonate to the same intangible forces that we do. By observing their positions and relationships at a given time we perceive the distribution of those energies at that moment. Humans are sensitive to and expressive of the same pattern.

Astrology is based on the theory of synchronicity, 'an acausal connecting principle.' Synchronicity refers to events related by meaning or shared identity rather than causation. Astrology correlates the simultaneous presentation of two energies, planetary and personal, both of which reflect an archetypal realm.

The material plane mirrors a spiritual template. Our physical, emotional and mental bodies ground a life force into an identity (soul) experienced through a conscious ego. Planets do the same. They express cosmic energies centered by the gravitational attraction of a star and made visible in its light.

Planetary rhythms flow in parallel with psychological dynamics. They do not generate action anymore than a clock striking High Noon would cause a gunfight in the Old West. They time moments of danger/opportunity, but do not determine their outcome.

Astrology is a symbolic logic that deals with a small number of basic forces tracked by the solar system's planets. Their arrangement displays the outline of its all-embracing order. Their movements echo its evolutionary process.

An individual embodies an evolutionary phase, or quality, of the solar system as portrayed by its planetary geometry at the moment of birth. Every person is a microcosm of the astronomical matrix within which we 'live and move and have our being.' Each manifests its state at a particular time. Our cosmic context reflects a spiritual truth, mental map, emotional template that we personify in real life. 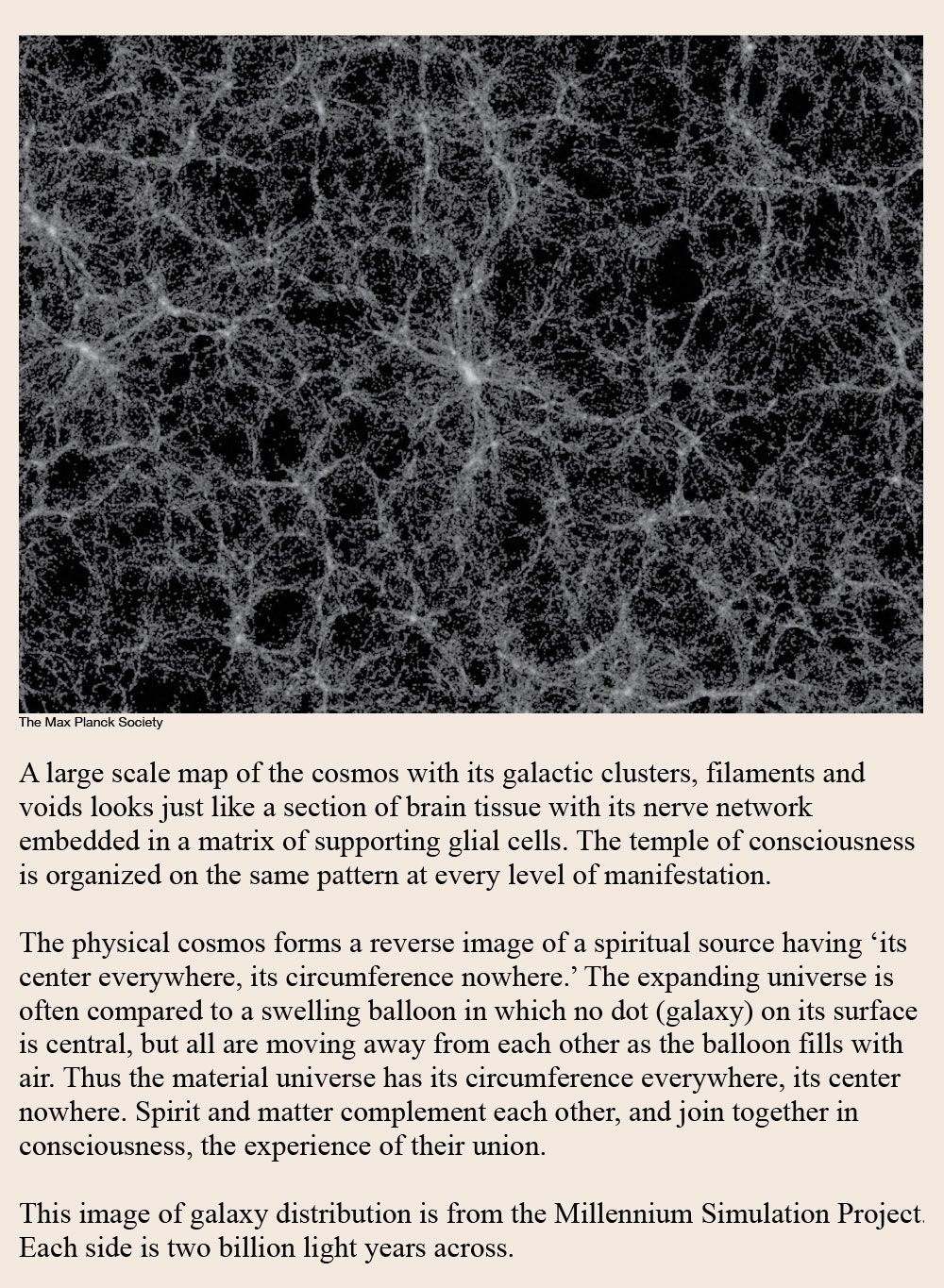